Last week, during the first heatwave of this summer, Chris and I were dreaming about a good refreshing frappuccino. The first time we’ve drank this cold delight was years ago at Starbucks, when they still had a lactose free version of this drink. Years later, we’re still craving for a cold “coffee” beverage for summer so, we decided to order a blender that can crush ice, and make a perfect frappuccino.

Yesterday was quite a hot Saturday, too hot to do anything so, we lazied up, hanging in the couch while sipping from our jar of frappuccino, and re-watching Breaking Bad.

After a few experiments, this is our favourite recipe until now (for 2 persons):

It’s very easy to make too, just throw all the ingredients into the blender, and a few seconds later it’s done. I know that a lot of people add whipped cream, and a whole bunch of other stuff, but both Chris and I prefer our food as simple as possible.

Yesterday was an amazing day, and I’m ready to have more of those. Let the summer begin!

Five years ago, I started to crochet a blanket. Due to the lack of time and many other reasons, I’ve never finished it.

A few weeks ago, I decided to pick my little project back up, and realized how much I’ve missed it. I’m at 67 of 90 patches now. Getting closer to the end.

Once my blanket will be done, I’ll make another. Meanwhile, I’ll also be discovering how to crochet amigurumi, but more about that later.

I wanted to do it for a very long time and I finally did… I’ve built my very own Picade! I’ve done it while watching this video. 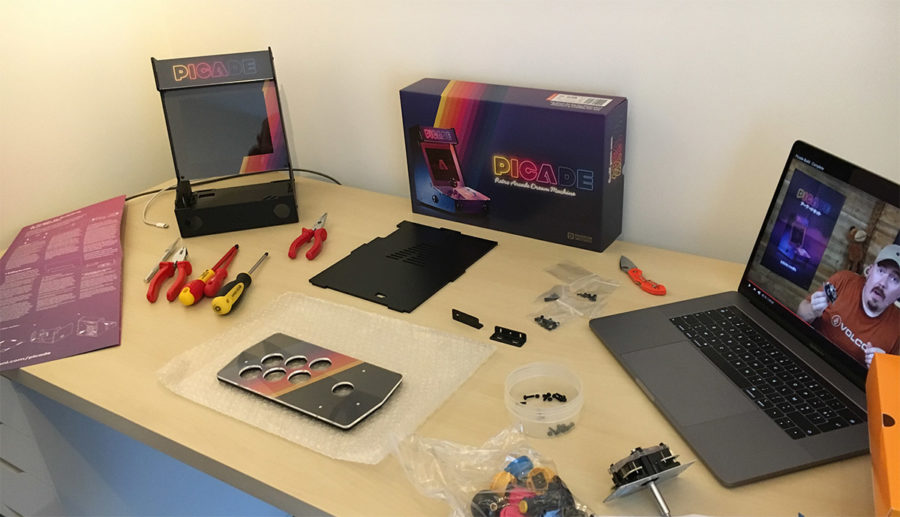 It took me two afternoons. The quality of the build is impressive, but what impressed me the most was the Raspberry Pi itself. It loads much faster than I expected and it is very easy to upload the roms wirelessly from my Mac via SMB.

Below is a small gallery of the building process. It starts with the frame and ends with the wiring.

I’d advise it to anyone who enjoys building things and playing retro games. Retropie doesn’t only emulates Mame roms, you can find the complete list of supported systems here. You don’t need any knowledge in electronics and no soldering is required. With a bit of logic, you can do anything.

During our second week off, Sardoken had the idea to write his own stories which, later on, I could illustrate. So, I decided to learn to draw again. It’s been 20 years since I last picked up a pencil… It will take some time to get back into it, but I won’t give up! I have spent a few afternoons copying simple drawings that I found on the internet, it’s was very relaxing. I’ll try to post my progress regularly.

It’s been a while that I wanted to knit my own scarf. I never knitted before and had no clue on how to do it. Thanks to a video on Youtube, I finally got started. It’s fun, but I made quite some mistakes, I guess that it will add some personality… I haven’t finished it yet, but I’m quite impatient to see the result.